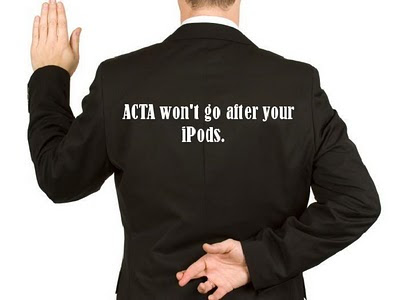 Council's intransigence to disclose all documents relating to the negotiations over an International Anti-Counterfeit Trade Agreement (ACTA) between the EU and more than 38 countries around the world, has stirred sentiments to Members of the European Parliament.

the Council is continuing its secretive stance, despite the entry into force of the Lisbon Treaty, which stipulates that the European Parliament should have full and immediate access to information at all stages of international negotiations. They also applaud a joint resolution tabled today by all political groups, according to which, the European Parliament reserves its right to take the case to the European Court of Justice in order to safeguard its prerogatives.

The four MEPs recently expressed their discontent and disapproval to such practices, in a Written Declaration to the European Parliament, which is rapidly on its way to be adopted by a majority of Representatives in the House.

Vice-President of the European Parliament Stavros Lambrinidis added the following: "This Parliament will not sit back silently while the fundamental rights of millions of citizens are being negotiated away behind closed doors. We oppose any "legislation laundering" on an international level of what would be very difficult to get through most national legislatures or the European Parliament. We are giving private companies sweeping rights to monitor indiscriminately every citizen's activities on the internet -- something that we refuse to allow even to our police when fighting terrorism. Access to the internet is in itself a fundamental right. It must be treated and protected as such".

According to MEP Françoise Castex, shadow rapporteur on the Gallo report on IPRs enforcement in the internal market: "Beyond the issue of transparency, we will not accept a text which might undermine access to medicines, freedom of speech and internet service providers liability. ACTA, by putting pressure on Internet service providers opens the door to private 'three strikes' approaches and generalized surveillance of the Net."

Alexander Alvaro, substitute member of the LIBE committee said: "Without any doubt, we have to fight counterfeiting rigorously. However, this fight should not be misused to introduce measures that were repeatedly declined by Parliament. Any international agreement affecting the everyday lives of European citizens must be discussed in a transparent and public manner - especially when issues such as blocking internet access of citizens are part of the agreement. We expect the Commission to make sure that the ACTA agreement fully sticks to the acquis communautaire and does not become acronym for Another Crazy Treaty Agreed."

Zuzana Roithová, rapporteur of the IMCO committee on the Gallo report on IPRs enforcement in the internal market, urges"Counterfeiting is the cancer of the Internal Market and the EU is desperately seeking the cure. The ACTA should improve international cooperation, if it offers the appropriate measures. It should focus on the counterfeited goods, which are dangerous to our health and lives, instead of hunting our high school students for downloading computer games from the Internet. It is unacceptable that the European Parliament is not informed about the current status of negotiations. If the Commission will not communicate with the Parliament there is a risk that the Parliament will refuse the ACTA as it refused the SWIFT agreement. Then we would lose another tool to tackle infringements of intellectual property rights. The majority of counterfeited goods come to Europe from China, but China is not involved in negotiations. How does the Commission think that it could persuade China to sign the ACTA afterwards?”