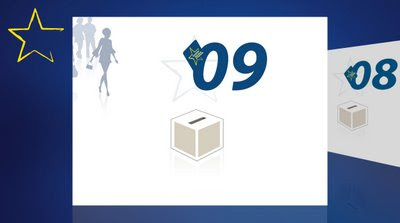 Here we present a selection of some of the major issues that will face the MEPs elected on 4-7 June 2009, which include financial services, social policy, climate change, EU enlargement, immigration, terrorism, security, agriculture and, if and when ratified by all Member States, the implementation of the Lisbon Treaty.
Economic and Monetary Affairs
The financial market crisis, which saw the banking system on the brink of collapse in autumn 2008, is now having an impact on the rest of the economy as the credit squeeze affects household spending and industrial investment. Improving Europe’s framework of financial regulation will be a major issue for the next European Parliament.
Employment and social protection in Europe
The consequences of the economic crisis, the impact of demographic change and the best way to safeguard the European social model are among issues in store for the new intake of MEPs. They will also have to take decisions on various topics debated during the 2004-2009 legislature.
Climate change/energy
Climate change is a crucial challenge for mankind. Implementing the EU's legislation to combat it, will be tough, but not enough. The EU must simultaneously pursue talks on a worldwide post-Kyoto climate regime, to be agreed in Copenhagen by the end of 2009.
Foreign affairs
Foreign affairs challenges include replacing the expired Partnership and Co-operation Agreement with Russia, preventing the disruption of gas supplies from Russia via the Ukraine, removing non-tariff barriers to trade with China, seeking a solution to the Israeli-Palestinian conflict, and monitoring progress towards association agreements with Latin America.
Enlargement
Bulgaria and Romania, which joined the EU in 2007, will not be the last to do so. Croatia, Turkey, and the Former Yugoslav Republic of Macedonia are official candidates. Others, such as Serbia, Montenegro and Kosovo, also have a "prospect" of joining. Debates about whether they are ready to join, and possible dates for joining, will be high on Parliament's agenda in the coming years.
Immigration
The arrival each year of many immigrants in the EU, often in tragic circumstances, is forcing Member States to cooperate on the management of migratory movements. In this field, any policy applied by one country has an impact on its neighbour, especially in southern Europe. The creation of a balanced immigration policy should benefit both the north and the south of the continent.
Terrorism/Security
In the years following attacks on New York, Madrid and London, the Member States improved their coordination in the fight against terrorism, partly through the "cooperation platforms" provided by Europol and Eurojust. New measures to prevent acts of terrorism will be examined by MEPs in the new Parliament.  The balance between security and protection on the one hand and privacy and fundamental rights on the other will also be key issues.
Agriculture
MEPs elected in June 2009 will take part in preparations for the next major overhaul of the CAP, scheduled for 2013. The outcome will depend partly on the expected budgetary battle between Member States on the post-2013 period and partly on other factors such as climate change.  The Lisbon Treaty, if ratified, will give Parliament joint-decision making powers with agriculture ministers in this area.
The Lisbon Treaty
If ratified by EU Member States, the Lisbon Treaty would create the legal framework and tools needed to meet Europe's most pressing challenges. By giving the directly-elected European Parliament more power over the EU’s decision making in areas like home affairs, agriculture and the budget, it would make the EU as a whole more democratically accountable.
http://www.facebook.com/ext/share.php?sid=81657437559&h=wZj_O&u=fslPm&ref=mf
http://www.europarl.europa.eu/elections2009/looking_ahead/product.htm;jsessionid=F966EBD4717DD557B20735887FEE01FF.node1?language=EN&ref=20090316TMN51949&secondRef=0
by constantinos alexacos
Αποστολή με μήνυμα ηλεκτρονικού ταχυδρομείου BlogThis!Μοιραστείτε το στο TwitterΜοιραστείτε το στο FacebookΚοινοποίηση στο Pinterest