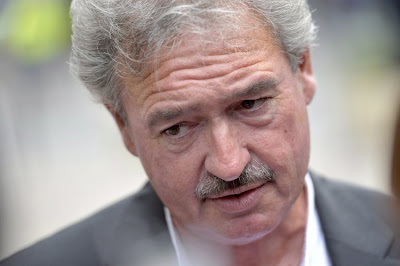 SPIEGEL ONLINE: Increasing numbers of people are losing their trust in the European Union and euroskeptic parties are gaining in popularity. Meanwhile politicians are caught up with petty bickering over rules. What is going wrong in Europe?
Asselborn: A few things are going wrong. But theEuropean Union as a historic peace project is not in question. The motivation for its founding was to prevent the Europeans from waging war against each other. But the political dimension -- that is the entire economic, social, environmental or foreign policies -- these are currently not convincing the people.

SPIEGEL ONLINE: Why not?
Asselborn: The things that are discussed and agreed upon in the EU are communicated to the people incorrectly or at least ambiguously through their government filters. Many governments present themselves to the voters as defenders of their national interests against the others. This way citizens often have the feeling that the EU and other EU members want to harm them or take something from them. The financial crisis has once again fatally brought this misunderstanding to a head.

SPIEGEL ONLINE: Martin Schulz, the freshly inaugurated president of the European Parliament, says that faith in the European project is threatened.
Asselborn: If things continue this way, certainly. Who can be expected to view Europe as good thing when, outside of a few nice words, most politicians make no argument for the collective cause? On the contrary, they use the EU as a comfortable scapegoat when things are going wrong back home. But the European Union will have no stability if the European people identify themselves only by their national interests. Without Europeans there is no Europe in the long run.

SPIEGEL ONLINE: But its not just a problem of inaccurate perception. The 27 EU member states are in fact accomplishing very little. Are the politicians in charge simply not in a position to better govern Europe, or are they unwilling?
Asselborn: It is mainly the governments of large EU countries that often radically push their own interests. Important EU projects are blocked only because there are regional elections back home, for example. The smaller members can't do this on such a scale because they have to work with others a lot more to achieve something.

SPIEGEL ONLINE: But right now France and Germany, Europe's "major powers," are engaged in "leading" Europe. How do you feel about this as the foreign minister of little Luxembourg?
Asselborn: Good, in principle. More than a third of all EU residents live in Germany and France. Making a peaceful co-existence possible for these two peoples, or even forcing it, was the central thought of the founding fathers. Paris and Berlin should lead. But they should do it under the collective EU treaties and not ignore them when it's convenient to form an "alliance of the willing" outside these agreements.

SPIEGEL ONLINE: The latest example of this was the so-called fiscal pact. For months German Chancellor Angela Merkel and French President Nicolas Sarkozy have been trying to implement a rigid fiscal austerity regime complete with legal "debt brakes" and threats of punishment for those who would transgress budgetary rules. Will this help Europe?
Asselborn: No. One could have just saved the big waste of time and energy it took to negotiate this international contract. Most of what they want to regulate could have easily been done in the existing system, the so-called EU secondary law.

SPIEGEL ONLINE: And on top of that, the idea that the European Commission would take legal action against member countries that take on too many debts also wouldn't work?
Asselborn: No, I don't think so. The desired pact is just an international contract between EU members, but it's not a part of the EU treaties. Outside of these treaties, the European Commission can only bring infringement proceedings, in concert with all EU member nations, in front of the European Court of Justice.

SPIEGEL ONLINE: That means that all 27 EU members must agree?
Asselborn: Yes.

SPIEGEL ONLINE: Some have already said clearly that they don't think much of it. Does that mean that, despite months of debate, nothing will come of the proposal?
Asselborn: The way things look today, it's hard to imagine. Like I said, a lot of energy and time wasted for nothing.

SPIEGEL ONLINE: What could have moved Chancellor Merkel to so massively invest in a project with a highly questionable outcome?
Asselborn: I think the German chancellor was led by two very different motivations with this proposal. On the one hand it is certainly about more stability in the crisis-stricken currency union. On the other hand, questions that have more to do with Germany than Europe could have played an important role. But the foreign minister of little Luxembourg shouldn't get mixed up in German domestic politics.

SPIEGEL ONLINE: Many countries have for years spent far more money than they brought in, amassing huge mountains of debt. Now they need to save. But are the radical austerity measures that Berlin suggests the right recipe?
Asselborn: Both are needed. Saving and living off less credit is important. But Europe can't starve itself to death. Right now we need growth above all. One shouldn't forget that the EU has 27 million unemployed.

SPIEGEL ONLINE: But not all EU members see it this way?
Asselborn: Obviously not.

SPIEGEL ONLINE: The heads of 11 international economic organizations -- among them the International Monetary Fund and the World Bank -- recently warned the leaders of all the countries against austerity measures that are too strict. In the long-run financial cutbacks could endanger economic growth and jobs.
Asselborn: At the summit of EU leaders at the end of the month, there should finally be an effort to search for ways to spur economic growth and create jobs. This is more essential than holding never-ending treaty debates.

SPIEGEL ONLINE: How Europe functions and how it should move forward is decided today almost exclusively by government leaders at the so-called EU summits. Is that actually a good thing?
Asselborn: I don't think it's good at all for Europe. All the summits cancel out something that we celebrated as a great advance: The introduction of majority decisions.

SPIEGEL ONLINE: How so?
Asselborn: At the summit meetings of chancellors, presidents and prime ministers there is no vote. They must all agree.

Spiegel-Online: How does this affect the quality of the decisions?
Asselborn: Anywhere a consensus is necessary there will be solutions of the lowest level, the lowest common denominator. That is neither good for the substance of the EU, nor for the people who are affected by the compromises forced through in this way.

Luxembourg's Foreign Minister Jean Asselborn has said Germany should be more careful in its tone towards Europe's smaller countries.

At a meeting of EU foreign ministers in Dublin on Friday, Asselborn commented that he, too, came from a country with a large banking sector. “Some countries, such as my country and Cyprus also, have legally built something up over the past decades. And you should not disparage that on principle,” he is quoted by German press agency “dpa”.

Asselborn said that Berlin should re-consider how it approaches several countries. “There is no one who says that the automobile industry or the weapons industry are over-proportional in Germany,” he added, saying that Berlin should watch out not to speak in a “hurtful” tone to fellow EU members.
by constantinos alexacos
Αποστολή με μήνυμα ηλεκτρονικού ταχυδρομείου BlogThis!Μοιραστείτε το στο TwitterΜοιραστείτε το στο FacebookΚοινοποίηση στο Pinterest